Now I’m kind of sorry I said I’d write a report today, because all I really want to do is curl up and read a book and then fall asleep.

Christmas Eve was very un-Christmas-Eve-like because we had already celebrated, so it was kind of a quiet day. We did manage to watch another episode of Jonathan Strange & Mr. Norrell with Lina in the afternoon. It is so much more fun to share the experience!

I made a family favorite for supper–spiced pumpkin soup. Then, while others relaxed in the living room, I embarked upon my sewing marathon. The more tired I got, the longer everything took! Flynn has wanted a Sith outfit for years, and I decided the time had come to get it done. I thought of doing part of it now and the rest for his birthday, but then realized I really wanted to get it over with.

The outer black robe was done early in the evening, since I had already spent quite a bit of time on it. I started work on the tunic, but then had to switch and work on the innermost layer while Spencer was still up to act as a model because I needed to see it on someone before finalizing it. After finishing that, I went back to the tunic. I made a really stupid mistake because I was stupidly tired, and that set me back a little. I had to re-cut one of the pieces.

Finally, I finished the tunic, after wrestling with my conscience and taking a shortcut I had hoped to avoid. It was 4:00 a.m. At that point I went to bed for two hours, then got up at 6:00 to make the hot cross bun dough. I had a little bit of time to start work on the belt before everyone got up, but I didn’t get it finished.

I made the buns and then, while the casserole was in the oven, we gathered in the living room and opened our stockings.

After that it was time for our big Christmas brunch–casserole, hot cross buns, and oranges.

Once fortified with food and tea, we returned to the living room to open the rest of the gifts. There were several happy surprises. I got a new stainless steel teakettle to replace the one that has boiled dry more than once. Spencer got a new soccer ball. Jasper got an airsoft revolver which he is very happy about. My husband, having been denied the chance to take a Chinese history class at the university, received two Chinese history courses on DVD.

I left it up to Lucy to set up the table with the usual array of snacks, chips, and dips. I spent most of the afternoon either working on the belt or dozing off. I was so tired! The girls pitched in to help me get the turkey dinner done and on the table. Some people had snacked so much they didn’t have much of an appetite for turkey!

This morning I slept in. I also took a long nap in the afternoon. It is so wonderful not to have that deadline looming anymore. Flynn and Spencer dressed in their sith/jedi regalia so we could take some photos before Flynn left at lunchtime. 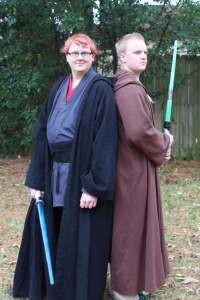 Before he left, though, it was time for a momentous occasion. Spencer had been saying for over a year that he would get his jedi braid cut off after the new Star Wars movie came out. I made him wait until after Christmas so I could get photos of him and Flynn together, but the time had come. 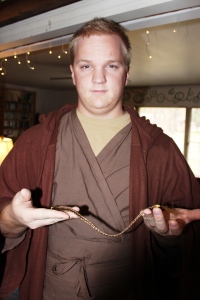 He’s had that braid for over two years!

Lina called and several of us got to talk to her. Then, after lunch, Lucy and Janet and I watched another episode with her. Two more to go!

My main accomplishment of the evening has been chording a hymn for tomorrow. My main goal is to keep catching up on my sleep until I feel well-rested!

Since Walter and Mercy and Spencer had to work this afternoon after Flynn left, it really feels like Christmas is over. I have plenty of work to do before school starts again, but I am not going to worry about it before Monday! 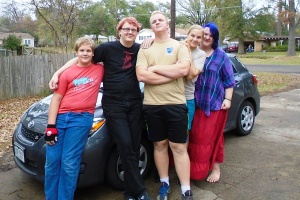 One thought on “Our Warm Texas Christmas”

Touchdown in Dallas.December 7th, 2016
Lina will be coming home for Christmas and staying till spring!
%d bloggers like this: